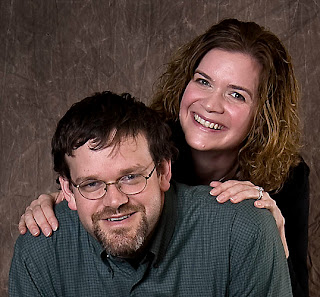 Hello everyone!  Today we have a two for one special!  The wonderful sibling writing team of Heather Frasier Brainerd and David Frasier!  And they’re kindly giving away a copy of Deception Al Dente to one lucky commentor.

Marion: Hey guys, tell us about yourself!

Heather: Being brother and sister, Dave and I have been writing together since we were kids. After a very long hiatus, we’ve resumed the habit. Living three hours from each other, all of our collaborations take place via internet and phone. Sounds tricky, I know, but it actually flows really well. You know what’s really cool? My oldest son and Dave’s oldest daughter love writing together!

Marion: That’s wonderful!  It’s lovely to know that these kinds of traditions get passed on.  *G*  What was the first book you ever read that really blew your mind, that you couldn’t stop thinking about after you’d finished?

Heather: Mystery by Peter Straub. It remains my favorite book to this day.

Dave: Lord of the Rings. I read it very young, so until that time my books were typically things like Encyclopedia Brown. Reading something with such a vivid, elaborately crafted world opened my eyes to what books could be.

Marion: How do you start thinking about a book?  Is it the characters that first pop to mind, or the setting, or the plot?  Where do you usually start?

Heather: It usually starts with a “what if” kind of idea. And, for me, this usually happens while I’m walking my dog!

Marion: If you could invite five writers, living or dead, to dinner, who would they be?

Heather: Hmm, good question! I’ll have to base this on my favorite books. Peter Straub, JRR Tolkien, JK Rowling, Frances Hodgson Burnett, and Sandra Boynton. They’d be a fun bunch!

Dave: Well, I would actually invite Dave Barry five times. I saw him speak at an insurance luncheon several years ago and it was funnier than any standup comedian I’ve ever seen. Maybe I’d invite him four times and have him bring Stephen King along with him once.

Marion: When was the last time you just had to write, and what inspired that feeling?

Heather: During NaNoWriMo in November. And I was inspired by, well, NaNoWriMo – National Novel Writing Month.

Dave: I feel like I have to write all the time. There are always several projects on my computer, and even more still stuck in my mind, that I want to get finished. The problem is that there isn’t enough time.

Marion: When you’re writing, what game do you most often play during “breaks”?

Heather: I wish I had time to play during breaks, instead of doing laundry and working out and taking care of three kids and a dog! When I do get to play a game, it’s either old-school Dungeons and Dragons with my boys or a dance game on the Xbox Kinect.

Dave: The bane of my writing existence is the internet. Take a couple of nights ago, for example. I don’t remember what topic I originally had to look up for whatever I was working on, but an hour later I was looking up the statistics of the 1989 Auburn Astros baseball team. For no real reason at all.

Marion: Oh, I know what you mean, Dave!  I do the same thing with research.  I’ll be studying siege engines one moment and an hour later, I’m reading about chemosynthetic life with no idea how I got there!  Have you ever tried to shake up your writing routine?  Writing at a different time? Writing in new places?  Writing nude?  *waggles eyebrows*

Heather: Sadly, no. My writing routine mainly consists of writing stuff in my head and then trying to get some computer time to preserve it before I forget!

Dave: When my kids were younger, I had no time to write during the day, only when everyone was in bed for the night. Lately, I’ve done nearly all of it during the day. Now I find it difficult, almost impossible, do get any quality writing done at night.

Marion: What is your absolute favorite sentence--just one sentence--from your book?  Why?

Heather: Oo! I wish I could tell you, but it would be a total spoiler! Just let me say that it’s in regard to someone not really being who they say they are. And I love it because I totally surprised Dave when I wrote it and emailed it off to him!

Dave: “Où est la bibliothèque?” I shouted, using up all the high school French I remembered. This line always cracks me up for some reason. It’s kind of an odd statement stuck in the middle of a scene where we’re starting to ratchet up the tension. 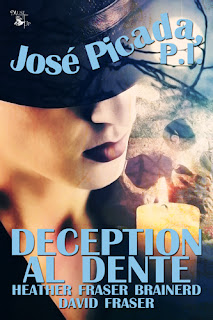 Marion: Hee!  What one scene do you think you spent the most time editing?  What was it about it that you couldn’t seem to get right?

Heather: The end of the book, no doubt. We tried one thing that didn’t quite feel right, tried something else with the same result, and finally combined the two into an awesome ending!

Marion: What’s your worst writing habit?  Something you know you shouldn’t do, but just can’t seem to stop?

Heather: I use lots of name brands, then have to go back and edit them out or change them into made-up brands.

Dave: As I mentioned before, I have a bad habit of getting sidetracked by the internet. Sometimes I’ll turn our internet router off just to eliminate the temptation.

Marion: What’s the one thing you wish you were good at, but just can’t seem to master?

Heather: Action. When I get to an action sequence, I tend to just put “Dave, insert something actiony here” and send it to him.

Dave: Physical descriptions. It doesn’t matter if it’s people or places, I can see them perfectly in my head, but I can’t translate it effectively to words. Luckily, Heather does it wonderfully. It’s kind of weird how our strengths and weaknesses balance each other out.

Marion: How do you ‘get into character’?  Are their certain characters you find it harder to right than others?

Heather: Almost all of our characters seem to have something humorous about them. Maybe that’s because humor is just so much fun to write!

Dave: I use music. Yes, most of the José Picada characters have something odd about them, so it was a steady diet of “Weird Al” Yankovic. A couple of months ago, I was working on a noir detective story set in the 1940s, so it was a lot of Glenn Miller.

Heather: That’s interesting. I absolutely cannot have music on while I write. It’s far too distracting.

Marion: If you could choose one writing related question you never, ever wanted to hear spoken again, what would it be?

Marion: *evil grin*  So… what did your “favorite” rejection letter say?

Dave: There isn’t one in particular that stands out. I “like” the ones that seem like someone actually took the time to read the work, rather than just sending out a standard form rejection.

Dave: Discrete Mathematics by Richard Johnsonbaugh. The book really delivers on the promise of the title. It’s all about discrete mathematics.

Marion: What project are you currently working on?

Heather: We’re putting the finishing touches on the second José Picada, P.I. book, while starting the planning stages for the third.

Dave: And I’m still trying to finish the noir book.

Marion: About how long does it take you to get from first draft to polished manuscript?  What does that process look like?

Heather: We’re very thorough first-drafters, so we usually have a pretty good manuscript at the end of that first phase. We then get on the phone and discuss it, making any changes and emailing it back-and-forth to each other as necessary.

Dave:  There are many wonderful book-related memories, so it’s difficult to pick just one. The best ones relate to reading to my kids at bed time. About a year ago, my oldest daughter and I wrapped up reading the Harry Potter series. We went through it all one chapter a night over several months. My worst book-related memory would probably be college, toting around what felt like 80 pounds of textbooks (including Discrete Mathematics). If only we had ebooks back then.

Marion: Name a book that, if you find out someone likes it, you know you will get along with that person.

Heather: Harry Potter and Lord of the Rings.

Dave: Lord of the Rings and Harry Potter.

Marion: *G*  Is there a writer whose style or talent you envy?  What is it about their writing that draws you in?

Heather and Dave: You can find us at drivingblindproductions.wordpress.com and facebook.com/BrainerdFraser.

Thank you both for dropping by!  And remember readers, Heather and Dave are giving away a FREE copy of Deception Al Dente to one lucky commentor!

My husband. I thought I thought I knew him. We've listened to each other's work stories for years. He becomes quite a different person when we write together. We worked together on Half Life - nuclear fission and film noir story. He's the toughest proofreader in the known universe. Don't talk to me about where I left the gun. What gun? That gun! How many bullets? Um. Revolver? Pistol? Oh dear.
Politics in Germany in 1936? Big learning curve. Writing together is so much fun, but you have to find a new dynamic. We argued about Thorium until our daughter got bored and told us off. We shut up and started up later. Best choice I ever made. Wait for the sequel.
April 19, 2013 at 4:37 PM

Leona~Author said…
I enjoyed your interview. I think it would be great to have somebody to help write and bounce ideas around with. Out of my seven siblings, only an older sister was interested in Journalizing, but not fiction.

I thought about Marion's question about a book making an impact. I was a naive high school freshman many long years ago and checked out Gone With the Wind from the school library. A lot of it went right over my head, but I was proud that I'd read a 1000 page book.

I returned the book and a matronly librarian snatched the book from my hands. "Trash! Trash! It does not belong in a school," she said.

I ducked my head in shame for reading it, but I thought it was good. Because of her attitude, it stuck in my mind a long time.

Marion Sipe said…
Thanks for dropping by everyone! Your comments are wonderful and it's nice to see that this interview made people think! And thank you Heather and David, you were lovely guests!
April 21, 2013 at 10:49 PM